Zbigniew Brzeziński, Democrat, counselor to President Lyndon B. Johnson, President Jimmy Carter’s National Security Advisor, foreign policy advisor to President Barack Obama: “The technotronic era involves the gradual appearance of a more controlled society. Such a society would be dominated by an elite, unrestrained by traditional values. Soon it will be possible to assert almost continuous surveillance over every citizen and maintain up-to-date complete files containing even the most personal information about the citizen. These files will be subject to instantaneous retrieval by the authorities. ”

“Another threat, less overt but no less basic, confronts liberal democracy. More directly linked to the impact of technology, it involves the gradual appearance of a more controlled and directed society. Such a society would be dominated by an elite whose claim to political power would rest on allegedly superior scientific knowhow. Unhindered by the restraints of traditional liberal values, this elite would not hesitate to achieve its political ends by using the latest modern techniques for influencing public behavior and keeping society under close surveillance and control. Under such circumstances, the scientific and technological momentum of the country would not be reversed but would actually feed on the situation it exploits.”

“… Persisting social crisis, the emergence of a charismatic personality, and the exploitation of mass media to obtain public confidence would be the steppingstones in the piecemeal transformation of the United States into a highly controlled society.”

“This regionalization is in keeping with the Tri-Lateral Plan which calls for a gradual convergence of East and West, ultimately leading toward the goal of one world government. National sovereignty is no longer a viable concept.”

“According to the official version of history, CIA aid to the mujahideen began during 1980, that is, after the Soviet army had invaded Afghanistan on December 24, 1979. But the truth, kept secret up to now, is quite different: it was in fact on July 3, 1979, that President Carter signed the first directive on clandestine aid to opponents of the pro-Soviet regime in Kabul. And on that very day I wrote a note to the president in which I explained to him that in my view aid was going to bring about a Soviet military intervention.”

Nouvel Observateur: “When the Soviets justified their intervention by claiming that they meant to counter a secret intervention by the United States in Afghanistan, no one believed them. However there was some truth in that…. You don’t regret anything today?”

Brzeziński: “Regret what? That secret operation was an excellent idea. Its effect was to draw the Russians into the Afghan trap and you want me to regret it? The day the Soviets officially crossed the border I wrote to President Carter roughly the following: “We now have the opportunity to give the USSR its own Vietnam War”.

[Brzeziński’s unrepentant admission that the U.S. overthrew the government of the People’s Democratic Party of Afghanistan and sold it as a Soviet invasion]

― Zbigniew Brzeziński, Between Two Ages: America’s Role in the Technetronic Era and Strategic Vision: America and the Crisis of Global Power. 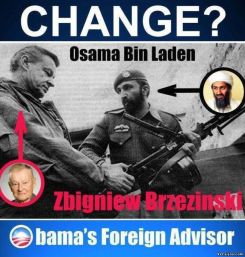