The first steps to profile

There is an organization of Muslims that is aware of this fundamental problem and is trying to reform Islam. Given Islam’s 1,400 year old history of eliminating reformers, the prospects are not bright, but there are intelligent people and excellent speakers among this group. They deserve our support. Profiling to eliminate radicals can only be successful if done by people inside their culture. Putting yourself in the shoes of the reformers, they would risk turning in Muslim fundamentalists only if they trusted the rest of us. They cannot trust the rest of us now, with Obama and Democrats appointing members of the Muslim Brotherhood to U.S. Homeland Security. In other word, the first action required is on our side.

Our culture is now built on tolerance and apathy and is confronted by the full onslaught of another culture built on passionate true-believers. The prospects are not good for us.

A very difficult period is ahead of us. This means nothing less than getting government to eliminate Muslims in government; if one looks at Islam as a religion, then that would conflict with the 1st amendment.  That shield must be removed first by general and legal agreement that Islam as configured is much broader; Islam is not only a religion. Only then could a humane policy of profiling members of the Muslim community by members of the Muslim community begin. Otherwise, we would be increasing the risk to the lives of reformers whose lives are in fact already at risk of attack by jihadists.  As outsiders, we cannot reform their culture.

I expect to see beheadings and honor killings at Democrat conventions in a Roman circus-like environment before we are done. Government will do nothing to stop it because government has already been infiltrated, as David Chaney said. The rest of us will be called out as deniers if we refuse to submit. 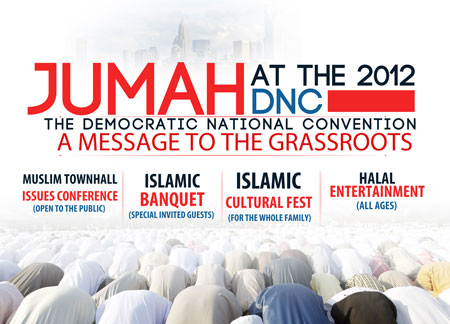