Tolerance, political correctness, and social justice lead to this

Posted on November 4, 2018 by budbromley 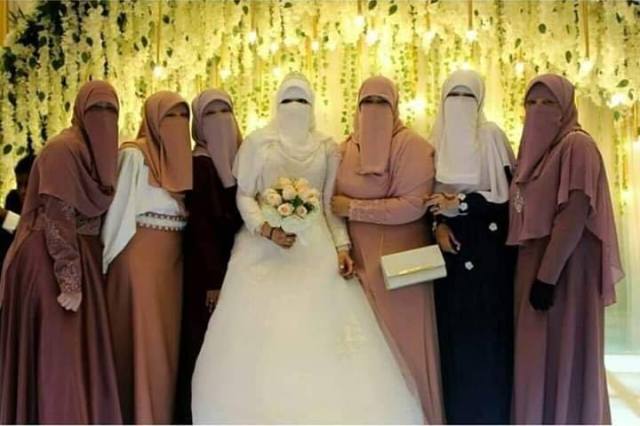 Tolerance, political correctness, and social justice lead inexorably to events like this. If you fail to see the difference between right and wrong, or fail to speak out, or fail to stand against it, or fail to vote for what is right, this will be your future. Contrary to what you have been taught, everyone’s opinion is not equal nor equally moral and all cultures are not equal. The concept of moral equivalency is a logical fallacy. Look it up and understand it. This wedding picture represents their culture, not their religion. You do not have to accept it and you should not.  It is a culture of misogyny. Not so long ago, their culture was not like this. Your vote determines whether America will be like this.

Heather Brooke at the Times newspaper of London, England, says “Mysogyny is a gateway belief, justifying abuse.” Here are 12 ways to spot a misogynist, according to female psychologist Berit Brogaard D.M.Sci., Ph.D.

“The misogynists. You may have heard of them. But what you may not realize is that they can be anywhere around you. They are notoriously hard to spot. They do not come with a label attached, and they may even come across as pro-woman.

In most cases, misogynists do not even know that they hate women. Misogyny is typically an unconscious hatred that men form early in life, often as a result of a trauma involving a female figure they trusted. An abusive or negligent mother, sister, teacher or girlfriend can plant a seed deep down in their brain’s subcortical matter.

The first signs of misogyny are barely noticeable, but with additional exposure to neglect, abuse, or lack of treatment, this behavioral seeding will grow larger and more prominent. But even when the misogyny reaches maturity and the tendency toward acting with hatred toward women can no longer be controlled, the misogynist and the women around him will often fail to notice the condition until it’s too late.

The following traits are typical of the misogynist:

He will zero in on a woman and choose her as his target. Her natural defenses may be down because he’s flirtatious, exciting, fun, and charismatic at first.
As time goes on, he begins to reveal a Jekyll & Hyde personality. He may change quickly from irresistible to rude, and from rude back to irresistible.
He will make promises to women and often fail to keep them. With men, on the other hand, he will almost always keep his word.
He will be late for appointments and dates with women, but be quite punctual with men.
His behavior toward women in general is grandiose, cocky, controlling, and self-centered.
He is extremely competitive, especially with women. If a woman does better than him socially or professionally, he feels terrible. If a man does better, he may have mixed feelings about it but he is able to look at the situation objectively.
He will unknowingly treat women differently from men in workplace and social settings, allowing men various liberties for which he will criticize female colleagues or friends.
He will be prepared (unconsciously) to use anything within his power to make women feel miserable. He may demand sex or withhold sex in his relationships, make jokes about women or put them down in public, “borrow” their ideas in professional contexts without giving them credit, or borrow money from them without paying them back.
On a date, he will treat a woman the opposite of how she prefers. If she is an old-style lady who prefers a “gentleman” who holds the door for her, orders for both and pays for the meal, he will treat her like one of his male buddies, order for himself, and let her pay for the whole meal if she offers (and sometimes even if she doesn’t). If she is a more independent type who prefers to order her own meal and pay for herself, he will rudely order for both and pay the check while she goes to the bathroom.
Sexually, he likes to control women and gives little or no attention to their sexual pleasure. Foreplay, if it occurs at all, is only a necessary means to an end. He likes oral sex but only as a recipient. His favorite positions enable him to avoid looking the woman in her eyes.
He will cheat on women he is dating or in a relationship with. Monogamy is the last thing he feels he owes a woman.
He may suddenly disappear from a relationship without ending it, but may come back three months later with an explanation designed to lure the woman back in.

Only rarely will a misogynist possess every one of these traits, which makes it harder to identify them. Their ability to lure women in with their charm and charisma adds to the difficulty of spotting the early-warning signs.

Women haters (unconsciously) get off on treating women badly. Every time they can put down a woman or hurt her feelings, they unconsciously feel good because deep down in their hidden brain, their bad behavior is rewarded with a dose of the pleasure chemical dopamine—which makes them want to repeat the behavior again and again.” ~ Berit Brogaard D.M.Sci., Ph.D

The Mysteries of Love
Berit Brogaard is the author of On Romantic Love
https://www.psychologytoday.com/…/2…/12-ways-spot-misogynist