The “Gang of Eight” Can’t See Straight …by Michael Cutler

“Furthermore, it is impossible to understand how the Gang of Eight has utterly ignored the fact that there is virtually no integrity to the process by which aliens are granted lawful status and U.S. citizenship under the current circumstances. Aliens who are applying to participate in the “DREAM Act” program cobbled together by the President without the consent of Congress are not being interviewed in person.” … “It is beyond comprehension that the current administration, the Gang of Eight and others are utterly ignoring the findings and recommendations of the 9/11 Commission Report that provided an in-depth analysis of how the terrorists who attacked our nation on September 11, 2001 were able to enter the United States in the first place and then manage to game the immigration benefits program, which enabled them to embed themselves in our country.”

~ Michael W. Cutler was a Senior Special Agent with the Immigration and Naturalization Service. 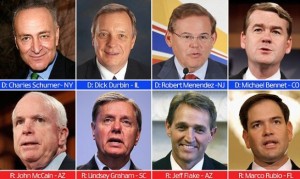