Studies of satellite imagery of earth over the last three decades show that the earth is getting greener.

Today’s atmospheric CO2 concentration is about 400 parts per million parts of air, based on volume, 400 ppmv or more commonly 400 ppm. During the geological age known as the Jurassic Period – which lasted about 60 million years – the mean CO2 concentration in the atmosphere was about 1900 ppm or more than 400% higher than today and the temperature at the surface averaged about 16.5 degrees centigrade, about 3.5 degrees centigrade higher than today. But during more than half of the Jurassic period, the CO2 level was stable at nearly 3000 ppm. I used the Jurassic as my example here because you may recall from reading or the movies that during the Jurassic period this planet was mostly covered in jungle and dinosaurs roamed the land and seas. Life was very abundant and green at much higher CO2 levels as well as at higher temperatures. The Jurassic was not the only period when this happened. (See graphic CO2 and Temperature.)

Humans contribute to the planet’s CO2. And the human portion of CO2, which is a greenhouse gas, does contribute to warming the atmosphere, but unfortunately not significantly. Total CO2 in the atmosphere has increased by about 33% since the pre-industrial era. But, unfortunately, burning of fossil fuels and breathing are not significant contributions to the planet’s carbon cycle.

The amount of CO2 contributed by humans from all sources is trivial with regard to the temperature of this planet. (See attached table Anthropogenic Contribution.) The total CO2 in the atmosphere is very important to keep the atmosphere warm, but humans contribute less than 5% of the total CO2. Humans annually contribute approximately 30 gigatons (30 billion tons) of CO2 to the atmosphere, a very small amount compared to the approximately 800 gigatons annually moving through the planet’s carbon cycle. Nature (non-human) produces about 770 gigatons of CO2 per year, humans produce about 30 gigatons per year. About 98% of the total 800 gigatons per year cycle is re-absorbed by nature. This re-absorption of CO2 does not differentiate between CO2 from humans and CO2 from other sources.

Most of the CO2 in the atmosphere was outgassed by the oceans and most of that CO2 in the oceans came from metamorphism of calcium carbonate (e.g. limestone rock) into silicon dioxide (e.g. sand) by volcanic high heat at the subduction zones deep beneath the oceans. Volcanoes, fissure and rift zones below the oceans and on land release large amounts of CO2 into the atmosphere. In daylight, when sunlight is warming the surface of the oceans and lakes, CO2, which is in dissolved in water in its ionic form as carbonic acid, is released at the surface into the atmosphere as gaseous CO2.  At night, when the surface of the water cools, CO2 is dissolved from the air into the water to form ionic carbonic acid. Cold water holds more CO2 (as carbonic acid) than warm water. Think of your cold, carbonated soda pop drink compared to your warm, flat soda pop. The relative amount of CO2 in the atmosphere compared to the amount of CO2 in ocean water is determined by Henry’s law. (4)

Henry’s law: At a constant temperature, the amount of a given gas that dissolves in a given type and volume of liquid is directly proportional to the partial pressure of that gas in equilibrium above that liquid. An equivalent way of stating the law is that the solubility of a gas in a liquid is directly proportional to the partial pressure of the gas above the liquid. At given temperatures of air and water, a given air pressure, and a given pH and other ionic concentrations in water, the relative concentration of CO2 in air versus CO2 dissolved in water will be in an equilibrium defined by Henry’s law. (4)

“This means that for an atmospheric doubling of CO2, there will have to be supplied 50 times more CO2 to the ocean to obtain chemical equilibrium. This total of 51 times the present amount of atmospheric CO2 carbon is more than the known reserves of fossil carbon. At our current conditions, according to Henry’s law, ocean water holds about 50 times as much carbon dioxide as does the atmosphere above it. ” (7)

An important point here is that ocean and lake water are not pure water. Many molecules are dissolved as ions or suspended in the water. These ions, especially calcium containing ions, act as buffers which increase the amount of carbon which can be dissolved in the water. When CO2 is dissolved in water it becomes an ionic form known as carbonic acid which in turn dissociates into hydrogen ions in water and bicarbonate ions in water. Carbonic acid readily combines with ionic forms of calcium. More on this at the carbon cycle link below. (3) Furthermore, oceans can never become acidic from either too much carbon or too much carbon dioxide because there is sufficient calcium already dissolved in the oceans to buffer all of the carbon on the planet and to convert that carbon into limestone. Thus, ocean chemistry scientists say that the oceans are an infinite sink for carbon. (1)(7)

There is far more calcium on earth than there is carbon. There is far more calcium dissolved in the oceans than there is carbon on the planet. (And calcium is not the only buffing system in the ocean.) Calcium containing molecules are precipitated out of water onto the sea bottom floors of oceans and lakes, primarily as calcite or aragonite, two forms of calcium carbonate. You know this rock as limestone, dolomite, marble and travertine. Most of the calcium carbonate found in and on the floor of the oceans and on land comes from animals and plants that have died and been metabolized by other forms of life. The CO2 in the atmosphere is taken in by plants which use it in photosynthesis to produce carbohydrates in cells and in turn they expire oxygen as their waste product. That’s fortunate for us. Animals like us then eat the plants containing carbohydrates and the carbon becomes part of the animal’s body or is released as waste CO2 in their breath or carbon molecules in their waste. That’s fortunate for plants. This continues sequentially until the animal is eaten or it dies and is metabolized by the food chain beneath it. The cells in the animal or plant are metabolized by a continuous chain of life forms and chemistry, a food pyramid, leaving calcium carbonate waste among other things. The calcium carbonate precipitates in water and eventually becomes sediment and over more time becomes stone. To break down this calcium carbonate in stone again into separate molecules containing calcium and separate molecules containing carbon (such as CO2) requires very high heat, usually the heat of volcanic lava. In other words, once that CO2 has been absorbed by a plant, unless that plant is burned, this CO2 will eventually become calcium carbonate trapped in some form of stone unless that stone is heated to the temperature of a volcano. This process is known as the carbon cycle, and it is absolutely critical for life as we know. See reference (3) below.

When we exhale (we release about 5000 ppm CO2 into the air) and when we burn fossil fuels, we are releasing much needed CO2 into the atmosphere. We are fortunate that our planet is still making fossil fuels like natural gas (methane), oil and coal as it has since life began. Plant life and algae will shut down without sufficient CO2 to “breathe.” Plant life begins shutting down around 150 ppm CO2. This planet’s current CO2 concentration of 400 ppm is dangerously low for plants and algae. It is a good thing we are releasing CO2 into the atmosphere. CO2 is not pollution.

We are currently in an ice age. (See graphic 1024px_Myr_Climate-Change) The definition of an ice age is that there is ice found year round at both the north and south poles of the planet. There have been periods of tens of millions of years when there was no ice at the poles. We are currently in what is known as an interglacial period, a relatively short period of ten thousand or so years when temperatures are relatively warm but there is still year round ice at the poles. (See attached graphic: Temperature Range.)

AGW (anthropogenic global warming) also known as anthropogenic climate change is a giant fraud. The propagators of this propaganda which is akin to a religion, including the United Nations and the current President of the United States, should be imprisoned for the harms they have caused millions of people including many thousands of unnecessary deaths.
(1) Stuum, W., and J.J. Morgan. 1970. Aquatic Chemistry: An Introduction Emphasizing Chemical Equilibria in Natural Waters. Wiley-Interscience, New York. 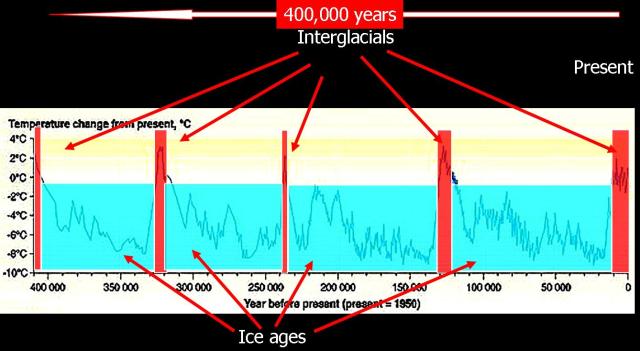 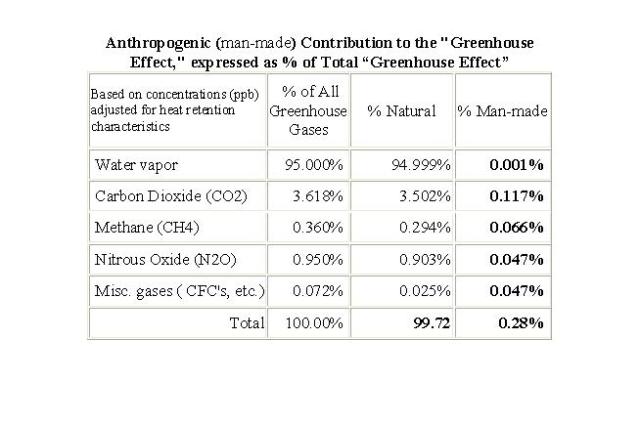